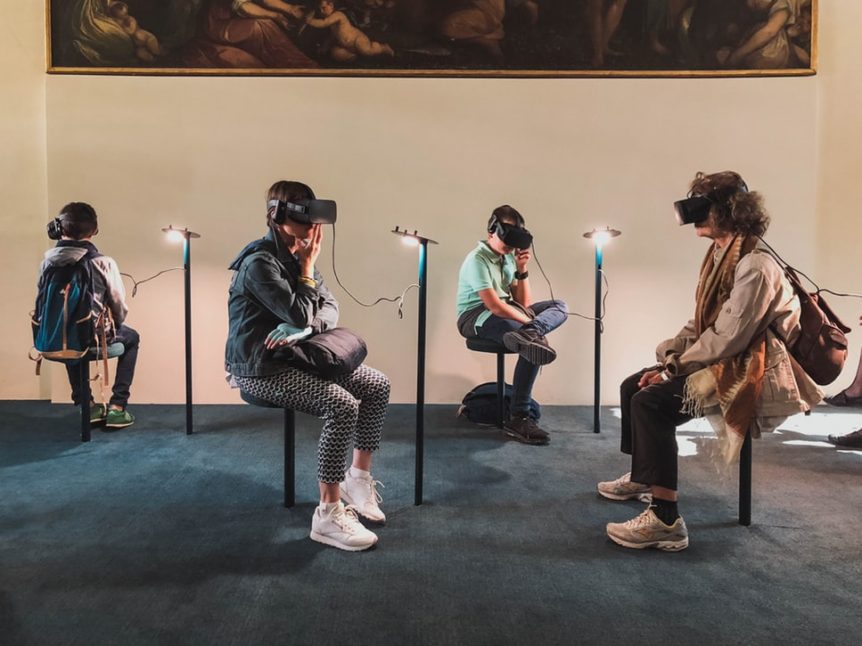 Over the past few years, Virtual Reality (VR) has gone from a futuristic “early-adopter” technology to an affordable technology that consumers can and do use. VR is expected to generate $7 billion in revenue by the end of this year and $75 billion by 2021. Eight out of the top 10 tech companies have invested heavily in VR.

A few years ago, you needed a VR headset like an Oculus Rift or Google Cardboard to utilize VR. Now all you need is a VR-capable smartphone to lose yourself in a three-dimensional world beyond your own reality.

Examples of How Businesses Can Use VR:

Eventually, even mom-and-pop retailers will be able to build fully digital stores. They can create their ideal customer experience without being constrained by budget for physical store design or having to be in a particular location.

Some retailers are using VR in unique and creative ways. Clothing retailer Topshop has created a digital experience where consumers can try on clothes digitally to see what the latest styles look like on them without actually having to physically try the clothes on.

For some businesses, like those in the medical field, VR is already changing the way employees train. Programs are being created to help doctors learn how to operate, nurses to practice finding a vein in a patient’s arm, and pilots to fly and land aircraft – from the safety of an office room.

For manufacturing, VR has huge implications. New hires for technical jobs can learn how to use new tools and perform vital functions from any location, instead of having to do on-site training in a physical location. VR training limits both cost and time to get a new hire up and running and makes it much easier for technicians to acquire new skills.

Eventually, event organizers will be able to create fully-digital event experiences without the constraints of physical space. But we’re not quite there yet… Right now, event organizers can use VR to improve their physical events.

For example, an event organizer can use a VR-enabled camera to walk through an event like an attendee and share the experience with people in any location. The organizer can also use digital markup to highlight the areas of the event that might be interesting to users, add digital descriptions, or links to more information. This would allow people to “attend” events without needing to physically be there.

As the technology progresses, eventually, event organizers could throw an entire event digitally without any real-life constraints. Imagine “attending” a networking event on the surface of the moon!

Event VR has big implications for digital marketing as well. The event organizer could do a VR-walkthrough of an event and publish the event on their WordPress website. From a digital marketing perspective, this could lead to some interesting strategies, for instance setting up “gated” areas that require a visitor to perform some sort of conversion to gain access to various areas of the event. This could be an excellent way to build a group of subscribers for future newsletters, promotions, or VR events.

VR lends itself well to showing off a project or case study.

A contractor, who prior to VR had been highlighting successful construction projects via photos and videos on their website, can now create a much more immersive case study with VR. The contractor could present a completed project in-depth, allowing a user to “walk through” the job site. Because the format is digital, they could add effects and notes to further explain the work that was done. The opportunities for customization are endless – they could add a weather effect to show how a project differs in a cold climate than a scorching-hot one, or highlight specific tools or processes with digitally-added arrows and descriptions, for example.

But imagine this: what if you could create a “virtual office” –  an ideal environment that reflects your company culture, and allows you to interview applicants from anywhere in the world and still showcase your office environment and culture?

Lloyds Banking Group is an early-adopter of VR technology for candidate interviews. Instead of asking candidates about how they would handle certain situations, they use VR to virtually put candidates in the situation and assess how well they handle it.

The real estate industry has been an early-adopter of VR technology.

Some of the use-cases for real estate VR include office planners allowing clients to virtually design an office space prior to construction. Real estate agents can use VR to create virtual tours of properties so that people can get an in-depth look at the space and make design decisions before they buy.

Hotels and restaurants are ripe for VR. For example, the Grand Velas Riviera Maya Hotel in Cancun has added a video commentary to a 360-degree tour of their lobby, restaurant, and suites to entice customers to visit.

Prior to VR, if people were shopping around for a hotel room, they’d be limited to viewing the room as an image (or in rare cases, a video). With VR, hotels can publish 360-degree virtual walkthroughs of a room, allowing people to see exactly what they’re buying before deciding on a room.

Using VR, companies can create virtual meeting rooms. Why pay for physical décor and meeting-room tech, when creating digital versions is more cost-effective and allows for customization according to the type of meeting?

What Does The Future Hold for VR?

VR is also beginning to blend with Augmented Reality (AR). AR is a live direct or indirect view of a physical, real-world environment whose elements are augmented (or supplemented) by computer-generated sensory input such as sound, video, graphics or GPS data. For example, the Pokémon Go phenomenon.

For the time being, VR and AR technologies are mostly constrained to the senses of sight and sound. As haptic technology becomes more advanced, VR immersion will add the other senses to the equation. What if you could reach out and virtually shake someone’s hand in VR, feeling their movements via haptic sensors in a VR-enabled glove? The technology has limitless implications for how humans perceive the world around us.

Interesting in using VR for your business? We have the equipment and technology to make it happen for you. Visit Ice Nine Online’s virtual reality page to learn more and request a quote.

P.S. Are you interested in reading some really good fiction about VR? Check out Ready Player One by Ernest Cline.