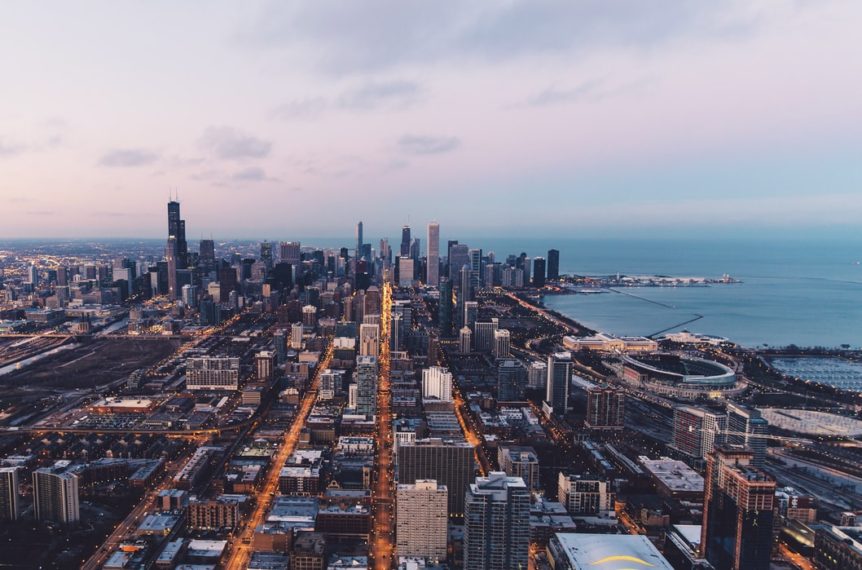 With the goal of boosting high-tech manufacturing, in 2014 Obama promised $70 million in federal funding for a Pentagon-led institute focused on high-tech digital manufacturing and design in Goose Island – an area known to native-Chicagoans for a brewery offering some of the best beer in Chicago.

“Keep in mind this is a consortium of more than 40 companies, 23 universities, labs like Northwestern and the University of Illinois and nearly 200 small businesses,” Mr. Obama said.

The state of Illinois and local businesses have raised another $250 million in private funding commitments for the hub. Once operational, the hub will be a center of innovation in developing technologies to boost manufacturing.

1871, the 50,000 square-foot now-famous startup hub in Merchandise Mart paved the way for the other startup accelerators, co-working spaces, and incubators springing up throughout Chicago. COOP, NextSpace, Grind and a plethora of other entrepreneur-friendly work spaces encourage collaboration, foster innovation, and provide resources to start-ups looking to make their mark. Many cater primarily to early-stage companies building Web and mobile applications. Accelerators like Startup Front, Healthbox, and Impact Engine offer bootcamps, training programs, and mentorship for early-stage Chicago startups.

In 2012 Server Farm Realty Inc. spent over $200 million to transform the R.R. Donnelley & Sons Co. building at 840 South Canal Street, formerly a General Electric Co. factory, into a state-of-the-art data center housing thousands of servers. As it turns out, due to Chicago’s rich history of manufacturing, many of Chicago’s former manufacturing hubs were built with heavy concrete floors, beefed-up architecture, and built for high power output – excellent infrastructure for data centers. Chicago has the third-biggest fiber optic capacity of any metro area in the country, behind New York and Washington. Three of the world’s largest data centers are in Chicago or Chicago suburbs.

4. The recent successes of Chicago-based startups.

“While I cannot predict the future, I anticipate we will see even more acquisitions and IPOs in 2014” said Built In Chicago CEO, Christopoulos Katris.

Some of the recent big splashes in Chicago’s start-up scene include PayPal’s purchase of payments gateway Braintree in an $800 million all-cash deal. GrubHub, a Chicago-based food-delivery application recently merged with NYC competitor Seamless and raised a much higher-than-expected $192 million IPO. Chicago turned out some of the best and brightest companies in 2013 and some of the most newsworthy mergers, acquisitions and IPOs.

5. Mayor Rahm Emanuel’s goal of earning Chicago the label of “The Startup City”

After Mayor Emanuel was elected, he appointed John Tolva as the first ever CTO of Chicago. In 2013, Mayor Emanuel vowed to double the size of the city’s tech sector by adding 40,000 jobs over the next ten years. Part of Emanuel’s plan is to host a venture capital summit in conjunction with Lollapalooza. Aside from Emanuel’s vows, Chicago’ tech events scene is booming. Highly successful events like Chicago Ideas Week, Social Media Week, Startup Weekend, and Tech Cocktail were precursors to the independent meetups, hackathons, and tech networking events now appearing throughout the city. If these trends continue, there’s no doubt that Chicago will be a dominant player in the worldwide tech scene.